The History of the Band

The History About Back 2 Miami.

From the ashes of previous musical adventures in 1990 Back 2 Miami was born.

It was the winter of 1990 when a couple of disgruntled musicians endeavored to lift the band from an uninspiring musical void in the depths of Shropshire, to the potentially more musically progressive area of Birmingham. We wanted fresh ideas and a new direction without losing the original plot, of creating a big and respected soul band. At this early stage you can only think that you know what you are doing and have the belief crossed with a little luck, which incidentally we so often had little of. Finding the right type of musicians was always going to be a problem. To discover another eight competent musicians with the right attitude and outlook, that didn’t mind getting paid much more than promises in a strange new environment, was said by the people closest to us as a touch ambitious or words to that effect. The challenge was on, and soon it was easy to see that the struggle was going to be a thing we would do only the once in a life time. Day by day, month by month we worked hard for little progress, but progress it was. 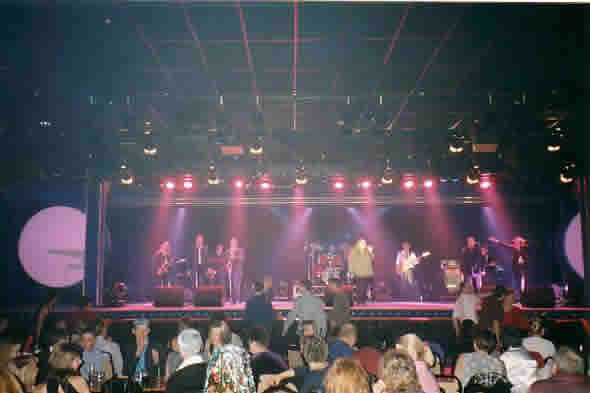 The initial live performances were based on any people we could talk into it, because playing live as quickly as possible would keep the momentum going that we had already built up on home soil and this became a priority. With this early line up we had a limited amount of success but we always knew that this was not the exact chemistry we set out to achieve. We knew that out of this existing line up there would probably only be a few if any musicians that were going to be part of the foundation of the Back 2 Miami we now know. Over the next three years we steadily gained the musicians with the right stuff in a similar manner, while still progressing in the live circuit with the ones without.

Gaining one musician at a time to the fold, made us stronger day by day, with a broader and more balanced outlook. By 1995 we started to fly, all the major Midland agents and some from further afield were working us (which amassed to some 73 gigs that year), and this was the only time that we felt that it was worth it after all. We rarely have to say good-bye to a musician these days but it can happen often for the best reasons, but is quickly remedied because of having more to offer a new recruit in terms of a solid successful touring soul band with a full diary.

This will be our twenty eighth  year as Back 2 Miami and we feel that we haven’t realised our true potential yet, so there is a lot more to come. We have, time after time entertained hundreds of people irrespective of age, background or musical taste, and we intend to entertain hundreds more. So if you like soul music played like it should be played, or you are just out for a good time, then don’t forget “Back 2 Miami”. Keep an eye out for them.

Back 2 Miami have worked extensively around the country at major holiday venues, armed forces functions, clubs, hotels, soul events, private parties, product promotions and so on, for the past twenty five or so years.
BACK 2 MIAMI have worked along side acts like, EDWIN STAR, EDDIE FLOYD, BOB MONKHOUSE, GENO WASHINGTON, Jnr WALKER, ROSE ROYCE to name but a few.

SOUL MAN, GET READY, LOVE TRAIN, THE SNAKE, SHAKE A TAIL FEATHER, I SPY FOR THE FBI, MUSTANG SALLY, KNOCK ON WOOD, SUPERSTITION, SWEET SOUL MUSIC, NOWHERE TO RUN, OUT ON THE FLOOR, RESCUE ME, DANCE TO THE MUSIC, WIPEOUT (THE BILLY SHAKEDOWN), COOL JERK, HIGHER & HIGHER, THINK, EVERYBODY NEEDS SOMEBODY TO LOVE, BAREFOOTIN, MIDNIGHT HOUR, NEEDLE IN A HAYSTACK and many more Soul & Northern Soul classics (the bands set list or selection at an actual event may or may not contain any or all of the listed tracks shown or mentioned here)..